This project consisted of profiling four commercial orange liqueurs (Triple-sec and Amaro) and one prototype to capture qualitative and quantitative sensory descriptors. The R&D team was interested in locating a new product prototype in the sensory space for the Triple-sec/Amaro product category. Based on the sensory results, the prototype may be re-formulated to match a commercial standard. A second goal of the experiment was to differentiate amongst liqueurs by comparing their sensory profiles statistically. Robust statistical results from analytical studies are critical to make decisions on new product launches, positioning as well as on consumer appreciation and acceptance. Differentiation amongst products would therefore be important in determining the influence of certain variables on the sensory characteristics of new products. A third objective was to collect information on key sensory descriptors to provide content for sensorial marketing (product package/labels, website, social feeds).

The sensory test used for this profiling study was the Pivot® Profile Test. The Tastel web sensory software was used for data capture, data analysis and graphing.

The sensory panel was made of five experts with a sensory experience of alcoholic beverages. The panel’s credentials included professional training as sensory scientists with experience in wine/spirit evaluation, membership of the BC VQA wine panel, and study towards the achievement of the WSET diploma level. The panel was familiar with sensory evaluation techniques but experienced the Pivot® Profile Test for the first time. An overview of the sensory method was presented to the judges by the panel coordinator. The panel was also given a list of typical sensory descriptors for amaro and triple-sec liqueurs as a reference.

The liqueurs were assessed blind and monadically. Samples were coded with 3-digit codes. Beverages were served based on their intensity of aroma and flavour. The mildest liqueur was served first and the strongest alcoholic beverage last. The pivot sample was a mixture of all the liqueurs under study. Panellists were asked to compare samples in pairs. Each coded liquor was evaluated against the “pivot.” Judges listed, using their own words, the sensory attributes that were “more” or “less” intense than that of the pivot sample. A copy of the sensory ballot is shown below.

Ninety-eight (98) distinct descriptors were collected to describe the sensory profiles of the 5 samples. A sample of the lexicon and its frequencies is shown on the left. The sensory panel coordinator proceeded by reviewing and grouping the sensory descriptors based on sensory similarities. Once the groupings were complete, the descriptors with the highest frequencies were chosen to generate a Correspondence Factor Analysis (CFA) plot. CFA is a graphical tool used to investigate relationships between categorical variables. The review of the sensory information also focused on attributes with low frequency that would provide insights into the sensory profile of a product (e.g., presence of faults or defects, specific aroma or flavour characteristics unique to a sample).

The sensory data for the five products and their sensory attributes were projected onto a 2- dimensional sensory space. The level of discrimination by the sensory panel was good. This is shown by the total inertia (sum of inertia for the first and second dimensions). The top 15 attributes were selected accounting for 78.9% of the sensory information from the panel. The selection of the top descriptors was carried out in such a way that the inertia was optimized while ensuring the plot was legible.

The biplot identified that the prototype was close in sensory profile to the commercial triple-sec, a sweet orange liquor made from orange and bitter orange oils and peels. The other samples were more bitter, smoky, and herbal than the prototype.

The product comparison (see the histogram for Bitter Orange descriptor) highlighted that the product formulation was perceived as more “bitter orange” than the other samples. The statistical significance of differences between two products identified that the prototype was significantly less woody (understand oaky or smoky) than the two commercial amaro liqueurs that were included in the flight. This observation was correct since the prototype was not oaked. In comparison, the commercial amaros were either aged in sherry casks or heavily smoked with wood smoke. The prototype was also significantly sweeter than the other samples, except for the orange Triple-sec which was equally sweet. 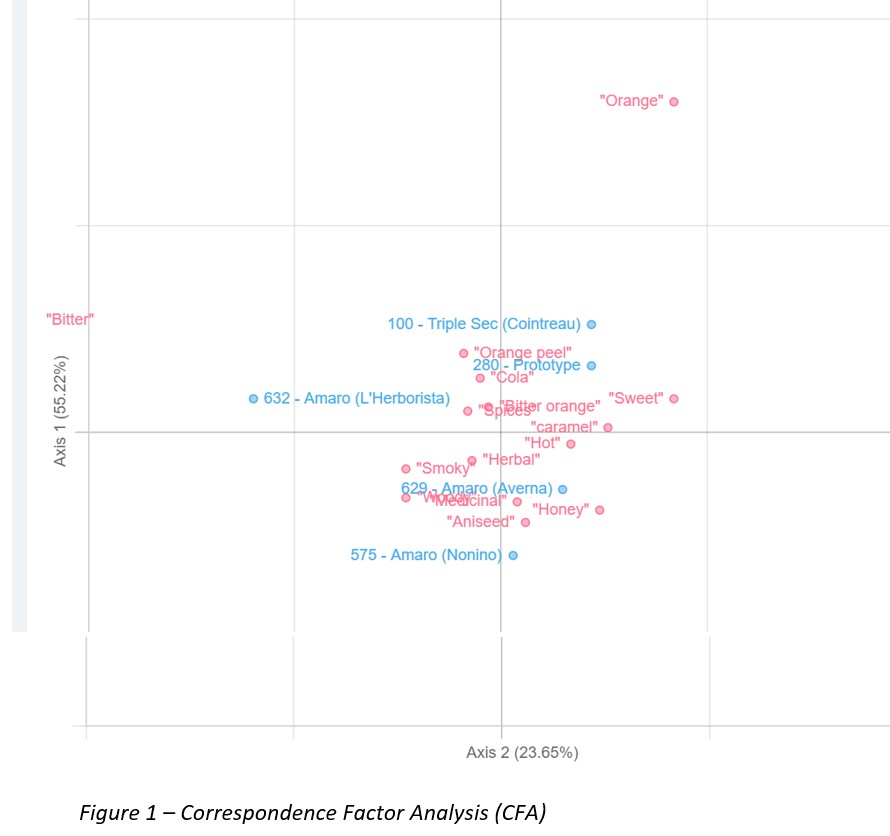 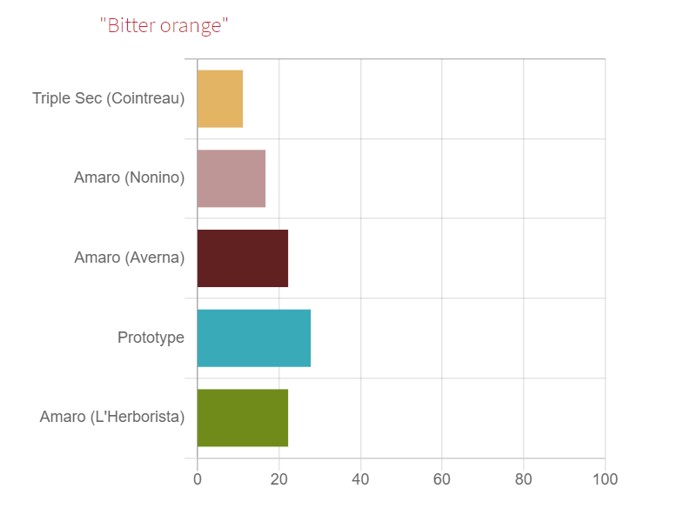 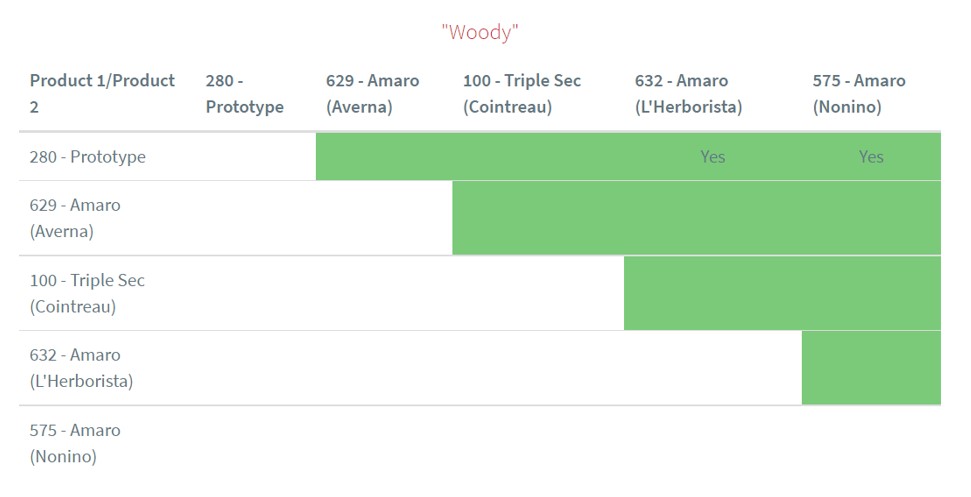 This study showcases how the Pivot® Profile Test can be used to quickly profile alcoholic beverages. The method doesn’t require extensive training because judges are already familiar with recognizing the sensory attributes for the product under study. Panellists also use their own language to describe sensory differences between samples. While this study was completed using sensory information from 5 expert judges, sensory experts recommend using at least 8 panellists for this experiment.

As stated by Miraballes et al. (2018), “the application of rapid [and cost-effective] descriptive sensory methodologies is very useful to determine the influence of different variables on the sensory characteristics of new food and beverage products” during the new product development cycle. The industry of cosmetics is also using this new sensory technique. According to Pensé-Lhéritier (2015), “given the new demands of the industrial world and the new innovation paths (shorter development times, complex products or willingness to include the consumers in the process), a need to access new methods has arisen. These ‘alternative’ methods [such as Pivot® Profile Test] that offer product positioning, ratings and attribute citation frequency, can be implemented with either a panel of experts or with consumers.”

Like to know more about the Pivot® Profile Test and its industry applications? Check out the resources below:

Get Tastelweb© (Food and Wine) tests done for your food! Contact us today to learn more.